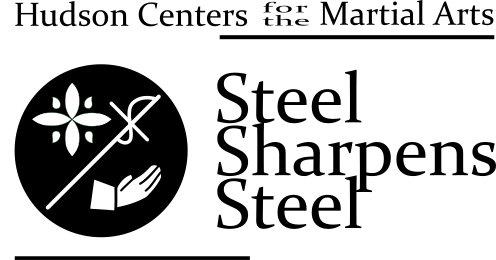 embodies our approach to fencing. Fencing is an athletic, fast sport that demands much from both body and mind, hence it is often referred to as "physical chess." Olympic-style fencing is just part of the long history of the blade!

HCMA teaches all levels of fencing. We primarily teach group classes, and include electric fencing when possible. Classes cover technical and strategic aspects of fencing. Students learn to help each other improve, and respectful conduct is required. Everyone works hard, plays hard, and has a great time pursuing excellence.

We teach foil and epee, but not sabre, though we can get a student started with sabre.

Depending on which location you attend, gear will either be available or you will need to purchase it. However, in most cases we can supply some gear for absolute beginners so that parents or students only buy equipment when they're sure fencing is their preferred sport! (A rental fee may apply.) Non-electric starter sets are around $125, and electric starter sets are around an additional $100.

The ancestor of modern fencing originated in Spain, where several books on fencing were written. Treatise on Arms was written by Diego de Valera between 1458 and 1471 and is one of the oldest surviving manuals on western fencing shortly before dueling came under official ban by the Catholic Monarchs. In conquest, the Spanish forces carried fencing around the world, particularly southern Italy, one of the major areas of strife between both nations.

The shift towards fencing as a sport rather than as military training happened from the mid-18th century, and was led by Domenico Angelo, who established a fencing academy, Angelo's School of Arms, in Carlisle House, Soho, London in 1763.[7] There, he taught the aristocracy the fashionable art of swordsmanship. His school was run by three generations of his family and dominated the art of European fencing for almost a century.

He established the essential rules of posture and footwork that still govern modern sport fencing, although his attacking and parrying methods were still much different from current practice. Although he intended to prepare his students for real combat, he was the first fencing master to emphasize the health and sporting benefits of fencing more than its use as a killing art, particularly in his influential book L’École des armes (The School of Fencing), published in 1763.

The first regularized fencing competition was held at the inaugural Grand Military Tournament and Assault at Arms in 1880, held at the Royal Agricultural Hall, in Islington in June. The Tournament featured a series of competitions between army officers and soldiers. Each bout was fought for five hits and the foils were pointed with black to aid the judges. The Amateur Gymnastic & Fencing Association drew up an official set of fencing regulations in 1896.

Starting with épée in 1933, side judges were replaced by the Laurent-Pagan electrical scoring apparatus, with an audible tone and a red or green light indicating when a touch landed. Foil was automated in 1956, sabre in 1988. The scoring box reduced the bias in judging, and permitted more accurate scoring of faster actions, lighter touches, and more touches to the back and flank than before.