Mr Hudson began fencing in high school, and karate in college, both of these in the early 80s. He is a 6th Dan black belt and a member of the Shihan board for the International Kwanmukan. Mr Hudson was a student of Grand Master George Anderson.

As a fencer, Mr Hudson has been a member of the USA Veteran's Epee Team, competing in the 2014 World Championships. He studied with Ray Bautista. When not involved in athletics, Mr Hudson performs cockpit accommodation studies for the US Air Force. He is a biological anthropologist, and enjoys playing electric bass and overseas motorcycle trips.

Mr Flatt has been fencing since 1994, starting at the Cincinnati Fencing Club. He took lessons from Ed Wright, and coached the Xavier University Fencing Club for several years.

In 2007, Mr Flatt began studying karate with Mr Hudson, and he currently holds 4th Dan rank. When not teaching fitness, he is a software engineer, actor, violinist, and researching well-being science. His lives in Denver with his wife, who is a certified yoga instructor, and from whom he has stolen some moves. 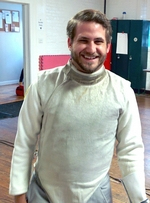 Mr Roat first studied fencing with Mr Hudson at the Countryside YMCA in Lebanon, Ohio. In college, he was a member of the highly regarded Ohio State University fencing team. In his non-fencing time, he is studying for a law degree, enjoys watching football, and sampling craft beers.